“No thanks, I’ve got too much on at the moment” I said when Olly called me to ask whether I would write an article for him on Creative Courage. He sounded a little deflated for the rest of the call, and we struggled to find much else to talk about. Strange, he’s usually very engaging. Anyway, the good news was that the call had finished early, and I had plenty of time to get myself fully prepped for my next Zoom call about purchase orders.

“Yes, of course I’ll do it, I’ve got a load on at the moment, but I should be able to write something next month if we can be a little flexible on the time frame” I said when Olly called me. He had asked me to write an article for his Creative Courage series and had, perhaps knowingly, perhaps inadvertently, hit the mother lode. If there was a Venn diagram entitled ‘how to get Gareth to do something’ he had perfectly found the intersection of ‘appeal to his vanity’ and ‘set him a challenge.’ He’d given me my very own opportunity to demonstrate Creative Courage. How meta. 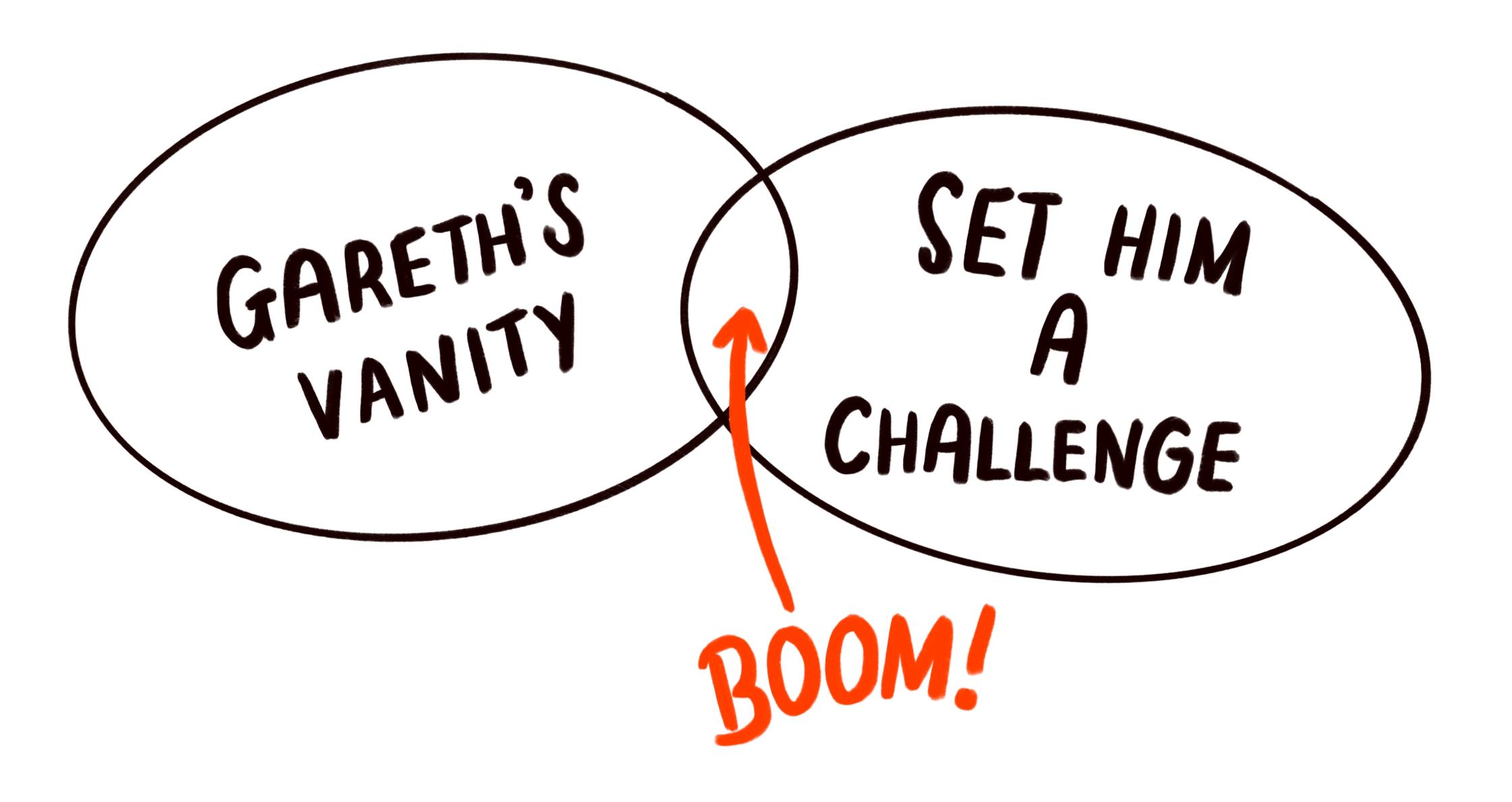 That alternative opening paragraph is (pretty much) how I come to be sitting here now. Olly had also stumbled upon something I’d been thinking about for some time, and that we are putting in place at Weetabix – how marketing leaders can create the right environment within their departments and beyond to foster not only creative courage but bold thinking and execution across a business. Our job is to make the brave feel, well, less brave.

And brave marketing is important to me for a few reasons, perhaps linking back to my professional vanity – I want to work on work that I’m proud to have on my cv. I also want to work on work that works, that is effective and efficient, that has cut through. You don’t do that by meekly finding the least offensive or a beige consensus. It takes vision and bravery to put your head above the conservative parapet, and let people take aim at you. Drumming gorillas don’t appear without someone being brave along the way. And at Weetabix we have created safe spaces for the team to air their bold ideas to a fresh pair of eyes.

“Yes, if…” leads to better, braver work. But, it’s also an insight that holds true elsewhere. A couple of examples… A few years ago, whist at Heineken, we developed a campaign for Bulmers cider called ‘Experimenters Wanted’ – the insight being that good things happen when you’re open to new experiences (and cider flavours). "Yes, if..." is also a foundation of great improvised comedy – you never see a participant refuse to open the front door in the ideal party guest game. And my final example - for a while I ran a supper club in my dining room – it sounded like fun when I had heard about them, so I just did it despite the many reasons not to. It was fun.

When you take a “yes, if…” approach it could lead you anywhere. They say you only regret the opportunities you didn’t take.

But consider the alternative for a moment. When you put yourself out there with a bold new idea, how demoralising is it to hear “No, that won’t work” or “Dave tried that back in 1983, and it wasn’t successful then”? It takes resilience and emotional energy to pull yourself back from there, and that energy is more useful being spent on something more productive. For me a “no, because…” attitude sucks the energy from an idea, room, or person.

How much more energising is it to hear “yes, if…”?

“Yes, that could work if we can get it listed in all retailers” is uplifting and encouraging compared to the alternative, but the key next step is the same in both scenarios. The Brand Manager on the receiving end of feedback like this moves on to fix the problem with much more oomph. That’s how good stuff happens.

I’ve been the beneficiary of both approaches. I was given the opportunity to step up to a board position, when my MD said “yes, if…”. In that one conversation he enthused me, helped me, and trusted me. And I bust a gut in that year to make sure I didn’t let him down. He had created a high expectation coupled with high support to get the best out of me, and that year happened to be one of the most successful for the team and brands we managed.

I’m not simply advocating a ‘yes, crack on’ approach, mind. There have been a few occasions when I wish I’d had some more coaching to help me explore all possible implications. A PR stunt involving a coat made of human hair that had me fielding media enquiries from Japan springs quickly to mind. The ‘if’ adds a coaching opportunity.

I know that the agency partners I have worked with over the years have appreciated a positive collaborative approach. For example, there’s that moment as we approach the end of every first creative presentation where the brand team are starting to get a little twitchy. The spotlight is shortly going to be shining on them to respond to the weeks of work that the agency have been putting in. The agency team click one final time to end the slide show, and reflect on the number of late-night pizzas they ate in the creation of this deck. The first words out of the client’s mouth should be one of positive appreciation of the work, lost sleep, and empty calories. Ideally combined with a “yes, if…” attitude.

So, if you think that this could work for you and your team, then what’s stopping you? What’s the worst that could happen? Just try it.

For me there's no downside, so we’ve committed to it in the Weetabix marketing team. I hope that we all may feel more supported, empowered, confident and valued. My agency partners might just enjoy working with me even more than they do already. Who knows, we may even get some courageous work that delivers outstanding results. But if we don’t say “yes, if…” then we’ll never know.